In collaboration with the labs of Andreas Teske (Univ. of North Carolina, Chapel Hill) and Brett Baker (Univ. of Texas at Austin), we study the genomics and ecophysiology of uncultured bacteria and archaea in Guaymas basin sediments. Specifically, we seek to determine​ the identities, in situ activities, and niche-determining factors of cells involved in the degradation of high molecular weight carbon (HMW) compounds of photosynthetic origin, detrital protein and lipids, and HMW hydrocarbons.

In collaboration with the labs of Peter Girguis (Harvard) and Mark Ellisman (UCSD), we study the three-dimensional organization of microbial activity in salt marsh and deep-sea sediments. To achieve this goal, we employ a unique combination of core sleeve in situ incubation technology, BONCAT, cell sorting, cutting-edge electron microscopy techniques, and 3D-computational reconstruction.

Our research activities focus on microbial ecophysiology: the study of the physiology of microorganisms with respect to their habitat. We are interested in how the activity of the “uncultured majority” – the large number of microbes that evades cultivation under laboratory conditions – impacts humans and the environment on a micron to global scale. We are convinced that only by gaining an understanding of microbes directly in their habitats researchers will be able to elucidate the mechanisms of microbial interactions with the biotic and abiotic world. To accomplish these goals, we apply an integrative approach that bridges the two extremes of the microbial scale bar: the individual cell and the whole community.

Very broadly, the research questions our lab addresses are:

(1) who is doing what (linking phylogenetic identity and physiological function),
(2) what are the abiotic and biotic factors controlling microbial in situ activity,
(3) how does this activity affect the environment and ultimately humans,
(4) what are the limits to metabolism in terms of energy, space, and time, and
(5) how can we discover novel structures and functions within uncultured microbial lineages?

Our approach to these problems is inherently multi-disciplinary and multi-scaled. In order to address previously unrecognized physiologies and cellular interactions of uncultured microbes, we employ a unique combination of metagenomics (as hypotheses generator), high-through-put metabolic screening via bioorthogonal labeling (to identify geochemical and biotic parameters driving ecology), and single cell resolved stable isotope probing via Raman and nanoSIMS (to identify specific growth-sustaining substrates). Because these approaches target the whole microbiome as well as the individual cell we do not depend on samples enriched in a target population, as is often necessitated in ecological studies. Our main study sites are sediments from a variety of geothermal, deep-sea, and coastal habitats.

If the physiology of uncultured cells is to be determined, approaches that target the single cell level are essential in order to link the identity of a cell to its specific function. Ideally, these approaches are not destructive to the cell so that it can be analyzed using complementary downstream applications, for example targeted cultivation or genome sequencing. Our lab has recently introduced the term Next-generation physiology approaches to refer to such techniques. Our lab is pioneering the development and application of a new approach to studying anabolically active, but uncultured cells. This technique, termed bioorthogonal non-canonical amino acid tagging (BONCAT), is based on the in vivo incorporation of synthetic amino acids that exploit the substrate promiscuity of the translational machinery. After incorporation into new proteins, these amino acids can be fluorescently detected via azide-alkyne click chemistry, a highly selective and biocompatible labeling reaction. When used in conjunction with rRNA-targeted fluorescence in situ hybridization (FISH), BONCAT allows the identity of a cell and its in situ activity to be linked. BONCAT is intrinsically high throughput and, when combined with cell-sorting devices enables individual cells to be separated from samples based on their anabolic activity. In contrast to isotope labeling approaches, which require specialized instrumentation, BONCAT-FISH and BONCAT-FACS use standard microscopes and flow cytometers that are more readily available to microbiology labs. We are currently expanding our work from the realm of proteins to other classes of biomolecules (DNA, lipids, peptidoglycan) and are developing new approaches to target cellular in situ activity on single cell level.

Development of new bioorthogonal labeling approaches for singe cell resolved activity tracing is performed in collaboration with JGI and EMSL via a FICUS project. Our work on developing Next-generation physiology approaches for visualizing activity of marine microbes at nm to cm scale is funded by the Marine Microbiology Initiative of the Gordon and Betty Moore Foundation and is performed in collaboration with Peter Girguis (Harvard), Mark Ellisman (UCSD), Valerie Copie and Brian Bothner (MSU). The acquisition of a Raman microscope was spearheaded by Roland and has been funded by the NSF MRI program and the M.J. Murdock Charitable Trust.

Multicellular magnetotactic bacteria: a window into the early evolution of advanced life

We study the ecological niches, biogeochemical roles, in situ activities, and biotechnological potential of lineages of (hyper)thermophilic uncultured archaea in geothermal features of Yellowstone National park. We currently focus our efforts on the lineages Aig-, Bathy-, Kor-, Verstraete-, and Thaumarchaeota and are interested in expanding our view towards novel archaeal groups. For this, we are performing a wide-range microbiological and geochemical survey of ~100 features in five regions of Yellowstone National Park (YNP, see map to the right).

We achieve our goal of linking new archaeal taxonomies with in situ function by a combination of metagenome sequencing of environmental DNA and testing genome-derived hypotheses by single cell targeted physiology approaches, including stable isotope probing and bioorthogonal labeling. The latter two approaches distinguish our lab from many other labs, who do not put their genomic hypotheses to an experimental test.

​​News release on deep-sea research funded through the NSF. 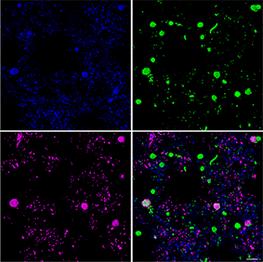 Research on MMB is funded by the NASAExobiology program.

Our hot spring research is supported by a FICUS project with the JGI and EMSL, an NSF EPSCoR project, the NASA Exobiology program, and a NASA Early Career Fellowship to Roland. Research is performed in collaboration with Emiley Eloe-Fadrosh and Tanja Woyke (JGI), Luke McKay, Tim McDermott, Bill Inskeep, Robin Gerlach, and others at MSU's Thermal Biology Institute.

In addition to bioorthogonal labeling, we use stable isotope probing in combination with single cell visualization instruments to study substrate uptake and in situ activity. Specifically, we are starting to use a Confocal Raman microscope with cell sorting capability that was recently installed at MSU. We will use this instrument to study the biochemistry and in situ biogeochemical function of uncultured cells, separate them from samples, and use function-targeted genomics to further characterize them. In addition, we collaborate with the Environmental Molecular Sciences Laboratory to use their nano-scale secondary ion mass spectrometry (nanoSIMS) instrument.

Some of the currently most pressing questions are: do individual cells within MMB consortia exhibit cell differentiation and division of labor? Are the consortia clonal and, if not, what are the evolutionary consequences? Which genetic factors do MMB share with other multicellular microbes and which ones set them apart from their unicellular relatives? What is the diversity and ecophysiology of MMB? What are the factors controlling their ecology and the fine interplay of aero-, chemo-, magneto-, and phototaxis?

​Understanding the origins of multicellularity and the organization of complex life is a critical endeavor in biology. Past studies on the transition from single cells to multicellular entities mostly focused on volvocine green algae and early radiating animal taxa as experimental systems. While multicellular bacteria exist, their organization appears comparatively simple, and multicellularity seems to occur only as an adaptation to changing environmental conditions or as a single step in a complex life cycle.

A group of delta-Proteobacteria termed multicellular magnetotactic bacteria (MMB) constitutes the only known exception to this view. MMB are mono-species consortia typically 3-15 μm in size. They are comprised of 10-60 cells arranged in symmetry around a central acellular compartment. Each cell is multiply flagellated and contains magnetic crystals, called magnetosomes, which are used to guide the consortia along the geomagnetic field lines. The life cycle of MMB has no known unicellular stage. Division occurs by separation of a MMB into two apparently identical daughter consortia, while disaggregated cells rapidly lose viability. These characteristics render MMB the only identified bacteria with an obligate multicellular lifestyle and make them a prime subject for the study of the early evolution of advanced life, the cellular and molecular organization of multicellular entities, and the extent of division of metabolic labor and cellular differentiation in bacteria.

If you are interested in learning more about Next-generation physiology approaches, please read our recent review. Next-generation physiology methods are either targeted at intrinsic characteristics of the cell (label-free methods) or employ substrate analog probing or stable isotope probing to study the in situ phenotype of cells. For a protocol on how to perform BONCAT-experiments see our book chapter. For talking about or teaching about BONCAT, free to use our slides.